Home » Cryptocurrency » What happens to Bitcoin in 2018? 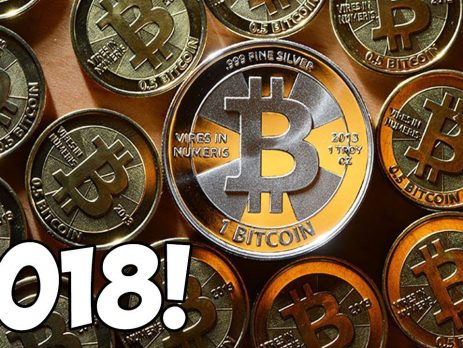 Not long ago, the cryptocurrency was something exotic and incomprehensible. The first Bitcoin transactions were conducted in 2009. The number of people who used digital currency for settlements and savings was negligible. But gradually the circle of users expanded, and Bitcoin became more and more popular and grew in price. Initially, this was facilitated by the fact that digital money could be obtained on a regular home computer. Then people appreciated the many benefits of Bitcoin.

The main advantages of Bitcoin are decentralization and anonymity. No one can control transactions and influence the value of this currency, including governments, banks and multinational corporations. Bitcoin does not exist in material form and is not issued by an institution such as a central bank. Cryptocurrency is a block of specially encrypted information that is stored in open databases

The process of virtual money emergence was organized in such a way that its quantity was limited to 21 million pieces. In order to get one coin, it is necessary to perform a huge number of mathematical operations, for which serious computer power is used. The more coins are issued, the more difficult the process becomes. Remotely bitcoin can be compared to gold. The world’s precious metal reserves are also limited. THE REASONS FOR THE CHANGE IN THE COURSE OF BITCOIN

Gold is constantly rising in price against all regular currencies. Same thing happens to the Bitcoin. The process of mining is similar to gold mining – just as difficult and costly. However, the number of miners is increasing every day, which increases the demand for and the cost of Bitcoin. The price of Bitcoin in dollars has been increasing slowly for several years, but in 2017 there was a sharp jump.

After a strong rise in the price of Bitcoin from $1,000 to $2,000, a speculative rush began, akin to 19th century gold fever. Bitcoin was constantly rising to $3,000, then $5,000 and $8,000, reaching a peak of $13,000 in early December. Then there were reports of futures trading on the American stock exchanges. This triggered another jump, and within a few days the Bitcoin approached $20,000, then fell below $15,000. This price increase was predicted, but it happened much faster. Many people believed in the value of the cryptocurrency and rushed to buy it. And the more people believe in the value of currency, the more reliable it is. Possessing Bitcoin is becoming more and more convenient and profitable. Now you can pay with cryptocurrency for any services and goods on the Internet and in usual establishments of trade and service. “It’s probably no coincidence that the demand for Bitcoin has grown against the background of financial stress in China and the crisis in the Middle East,” said Greg Gibbs, an analyst at Amplifying Global FX Capital. According to him, there are even signs that investors are beginning to give up gold in favor of Bitcoin, and this indicates a “move away from the assets – shelters of the old world in the digital world

In the latest rating of Forex brokers we provide an opportunity to trade bitcoin and other cryptocurrencies with modern companies. Major exchanges for exchange, purchase and sale of digital currencies have started operating. Now all and many companies are beginning to offer trade in cryptocurrencies. For example, recently the Forex broker has started offering its clients trading in the pair BTC USD. Many traders immediately appreciated it, as evidenced by the positive feedback on the Forex trading system on our website.

Bitcoin is not yet part of the international banking system, although it is recognized as a legal tender in a number of countries. Given the decentralization of this payment system, it can be concluded that Bitcoin is not affected by economic factors. Crypto-currency exchange rates and charts primarily reflect demand. Bitcoin prices are also influenced by news about events in the field of cryptocurrencies and the readiness of financial and trade organizations to work with them.

As of 2017, Bitcoin cannot be classified as a full-fledged currency as it does not meet the international monetary unit standard. Virtual currency is not secured by the real value or guarantees of the state. Its value is ensured only by the trust of its owners, and the willingness to accept bitcoins as payment. And if that trust exists and is strengthened, digital money will continue to exist as long as computers work.

Many world experts are convinced that if the circle of Bitcoin users expands and the number of coins is limited, its price will inevitably grow. Already got most of the coins. At the beginning of 2018, 80% of the 21 million bitcoins will be in circulation. It would seem that increasing the amount of money should reduce its value. But the growth in the number of Bitcoin holders outpaces the growth in the number of coins. That way, the price of Bitcoin is bound to rise. They call various figures from $25,000 to $100,000 by the time the issue is completed. Thus, the expert Cliff High says, “Next year, the quote of Bitcoin will be 3 times higher than the cost of an ounce of gold. Growth will be systematic and stable. Moreover, there will be new races upwards.” Ronnie Moas, a well-known financial analyst and founder of investment firm Standpoint Research, is sure that cryptocurrencies are a rather viable class of assets and their total capitalization in 10 years can reach $2 trillion. “In early July, Bitcoin traded around $2500. I’m sure we’ll probably see $15,000-20,000 per Bitcoin in the next three years,” Moas said. In September 2017, he gave a new forecast on the price of Bitcoin for 2018, saying that he now sees it in the region of $7,500 per coin. Ronnie Moas’s new opinion in November 2017 – “In the next 6-12 months I expect Bitcoin to make a jump to $15,000 (and possibly even $20,000). I call the price of Bitcoin Bitcoin itself plus Bitcoin Cash plus Bitcoin Gold… we’ve already reached $10,000 by this estimate… compared to $2570 when I recommended Bitcoin in early July

Mois’s numerous optimistic forecasts came true earlier than he expected, which forced him to reconsider the last forecast and raise the bar. In his opinion, the Bitcoin exchange rate will reach $14000 in 2018, but this forecast was already exceeded in December 2017

Mining experts say that once 80% of the emission is achieved, further production will be very difficult. We don’t know exactly what’s going to happen, but 2018 will be a very important year for Bitcoin. However, it is well known that institutional investors are beginning to show interest in Bitcoin

In the financial community, it is said that central banks will start buying Bitcoin if it reaches a capitalization of $500 billion. But that’s only possible with a coin price of $30,000. After a sharp jump in Bitcoin prices, various forecasts were made for 2018. But the reality has surpassed all expectations. Bitcoin rose above the expected 2018 price already in the fourth quarter of 2017. Various forecasts are made again, but all agree on one thing – the volatility of the course will be very high. The price of Bitcoin may fall due to the emergence of promising and competitive digital currencies. Or rather, there are already such currencies, the only question is in the development of their popularity. Efirium and Lightcoin are known to everyone and are discussed on an equal footing with Bitcoin. Prices can be seriously affected by legalization and attempts to regulate the digital currency market. There are reports of Bitcoin confessions in Russia. The Central Bank and the Ministry of Finance discuss methods of control over cryptocurrency transactions. The authorities are concerned about the potential of digital currencies for illegal cash-out and tax evasion. Therefore, Bitcoin may be legalized in Russia in 2018. In other countries, it’s already happening. In Japan and Germany, the cryptocurrency is actively used in electronic calculations, and in Switzerland, Bitcoin is equated with official currencies. The number of users of cryptocurrency today exceeds 10 million people. Over the next few years, this figure could rise to 100 million We also advise you to pay attention to the full list of brokers offering Bitcoin trading.

At the end of the article, be sure to watch the most interesting video about Bitcoin and its history. In 20 minutes you will get answers to all the most frequently asked questions about cryptocurrency.