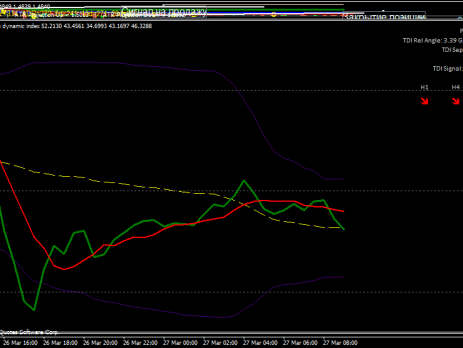 Australian trader Likica has modified Trading Made Simple (TMS), a well-known trading system in the West. The basis of this system is the TDI and Synergy_APB1 Alerts indicators. The M30 graph is used for input and output. However, other timeframes are also used for analysis (H1, H4, M15). The TMS 30 system is distinguished by the use of a number of other indicators that help to identify the entry and exit points more accurately When analyzing the behavior of the TDI (Trading Dynamic Index) indicator, one should take into account the angle of inclination of the green line and its intersection with the red line. Also important are the level values, or rather the intersection of these lines with level 50 and approaching levels 32 and 68. This indicator is similar to the well-known Stochastic, but more accurate.

The Synergy_APB1 Alerts indicator turns the bars pink when decreasing and green when growing. The colors can be adjusted as desired. The Inside_Bar indicator shows bars that are higher or lower than the previous ones. Auxiliary indicators used in the system are Daily Open Line, 200 EMA, Auto-Pivot_Plotter_Weekly_V2__1, GMMASlow.

Trading time of the system – European and American sessions. The main rule is to trade with the Day Line, 200 EMAs and weekly support and resistance levels. If the price is below these values, then the opening of a sell position is considered, if higher – for buying Example of a sell signal for GBP/USD pair. The Synergy_APB1 Alerts indicator has changed the bar color and Inside_Bar has shown a decrease. But the most important thing is that the TDI indicator shows the slope down and the intersection with the red line. Shortly after the position was opened, the price fell below GMMA Slow, which confirmed the correctness of the actions. Closing took place on the opposite signal, when the green line of the TDI indicator crossed the red line upwards, and Inside_Bar showed an increase Example of a buy signal. Here everything is similar to a sell signal, only the green TDI line crossed red upwards. Closing also took place on the opposite signal.

The TMS 30 system is quite simple, but before you trade on it, you should study the behavior of indicators in different market conditions, as in the period of flute can be a lot of false signals. For the same reason, stop-losses must be set at levels above or below local lows and highs.