The system of intraday trading at the Forex market 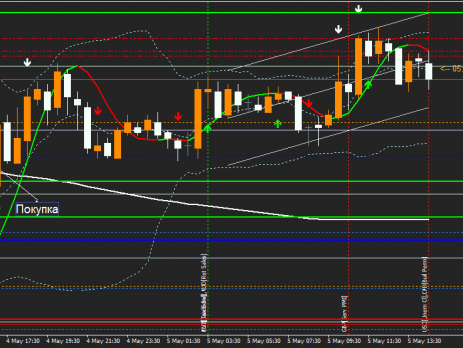 The system of intraday trading at the Forex market

The “Linear Regression Intraday” system is based on the principle of following the trend. The trend is determined by the price behavior in the “Linear Regression Channel”. The system is designed for intraday trading on 15 and 30 minutes timeframes. It is more expedient to trade major currency pairs and indices. For index trading, ecn brokers with the smallest spreads are better suited. The main time of trade is the European and American sessions.

The basis of the system is the “Regression Channel” indicator, which creates a linear regression channel, which is based on the trend of linear regression, which is an ordinary trend line, plotted between two points on the chart using the method of least squares. As a result, this line turns out to be an accurate average of the changing price line. It can be considered as a “equilibrium” price line, and any deviation from it up or down indicates increased activity of buyers or sellers, respectively. The channel consists of two parallel lines, equidistant up and down from the trend line of the linear regression. The distance between the channel boundaries and the regression line is equal to the maximum deviation of the closing price from the regression line. All price changes take place within the channel boundaries, where the lower boundary plays the role of the support line, and the upper boundary plays the role of the resistance line. Usually the prices go beyond the boundaries of the channel only for a short time. If they stay out of the channel longer than usual, it is a sign of a reversal of the trend.

The trend is confirmed by the Halal Moving Average (HMA) indicator displayed as a red or green line, depending on the direction. The direction of the global trend helps to determine the moving average with the period of 200, and the volatility limits are determined by the indicator “Bollinger Bands”. The information indicator Candle Countdown displays a timer on the chart of the currency pair, showing the time until the end of the current candle (bar). In this case, the time pointer moves along with the price. The Candle Countdown indicator settings allow you to change the color of the displayed time, size and shift relative to the zero bar. The Candle Countdown indicator works correctly on all timeframes. To make the work of a trader easier, the system template contains indicators “Indicator maximum and minimum” and “News Forex Factory”. The first one shows the extrema of the previous day, and the second one shows the economic news on the chart.

The system provides many opportunities for analysis and decision making. In this screenshot, one of the examples of entry into buying after the “HMA” line became green, the regression channel is up and the price crossed the MA200 line.

In this picture the example of a sale after the “HMA” line became red, the regression channel is directed down and the price crossed down the MA200 line.

In all cases, the stop loss is set at the nearest minimum or maximum. It is not recommended to trade before the release of important economic news. Basic exit from the position when changing the color of the “HMA” indicator, although other options are possible. For example, a fixed takeprofit or touching the regression channel boundary.