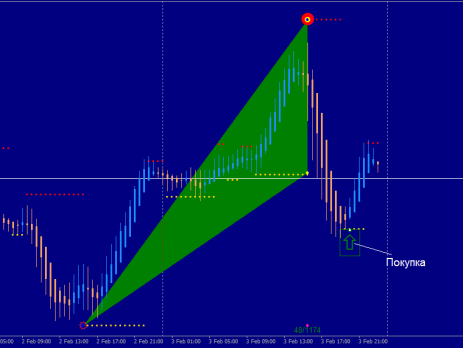 The “Triangle retracement” system is designed for trading on the Forex market and is based on the price behavior. The idea of the system is that after the pattern “Triangle” appears, the price returns to the middle point of the figure and continues moving in the same direction. You can trade on any timeframe, starting with the fifteen-minute frame. The system is suitable for all currency pairs and various financial instruments. This also applies to goods. For example, it is possible to trade oil on the Forex market. The “Triangle retracement” system consists of a set of technical indicators for the Metatrader terminal.

The main system indicator is “Zig zag 2vf”. It is based on the standard “Zig Zag” indicator. The algorithm of its calculation has not been changed, but it is reflected on the chart with pink, blue and yellow dots and visually shows the direction of movement, recovery percentage and beam size in points. When the trend is up, the triangle is colored green and the text “UP Trend Big” appears. A red triangle and the text “DOWN Trend Big” appear when decreasing. All parameters of the indicator are set up.

The “Heiken Aschi MA T3” indicator is one of the modifications of the known analysis tool. It colours Japanese candles blue or orange depending on the direction of travel.

An important element of the system is the “Buy-Sell_Alerts” indicator. It forms support and resistance levels in the current time. These levels are displayed as red or yellow dots

This screenshot shows a favorable situation for shopping. A green triangle was formed and the text “UP Trend Big” appeared. The “Chaos Semafor” indicator formed a big red circle, and the candle was colored blue. Yellow points of the “Buy-Sell_Alerts” indicator appeared. Stop-loss is set below these points

This shows the situation for sales. A red triangle was formed and the text “DOWN Trend Big” appeared. The “Chaos Semafor” indicator formed a large red circle, and the candle was colored orange. Red dots of “Buy-Sell_Alerts” indicator appeared. Stop-loss is set above these points.

Withdrawal from the position is left to the trader’s discretion. It depends on the working timeframe, financial instrument and trading style.