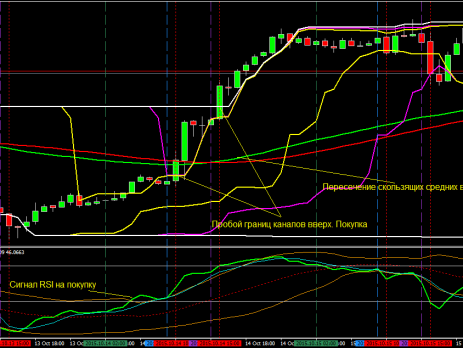 The system “Donchian Channels Forex Trading System” stands out among such trading systems by its simplicity of calculations and easily readable trading signals. The principle of calculating the channel, proposed in the 70s by the author of the methodology Richard Doncien, should determine the maximum and minimum values of the price for a certain period. In this case, only the highest and the lowest cost is taken into account, and two lines are built on them to form the price range. To calculate the price range, only one parameter is important – the period during which extrema are defined. Richard Doncien recommended a period of use = 20. It’s no coincidence. Initially, this strategy was designed for long-term trade, which averaged the number of working days per month. But the cycle of 20 candlesticks is equally effective for trading on an hourly period of time or even for scalping on M5. Until now, the Donchian channel has been used in many trading systems for following the trend. Periods of time for the construction of the canal are used in the range from 18 to 24.

There are 3 Donchian channels installed in the template of this system. The RSI Dynamic Zone indicator and 2 moving averages with periods of 20 and 100 are used as filters.

The Donchian channels are installed as follows:

Yellow channel with a period of 10.

For medium and long term purchases, we enter at the break-up of the white channel(60), and exit at the crossing down of the magenta channel(20). For short-term purchases, we enter when channel 20 is broken, and exit when crossing channel 10 down. The RSI value should be greater than 50, and the moving average of 20 should be higher than the average with the value of 100.

Entry into sales is similar. Enter when a larger channel breaks down and exits when a smaller channel breaks up. The RSI value should be less than 50, and the moving average of 20 should be lower than the average with the value of 100. Due to the possibility of false signals in all cases, the Stop Loss is set at the opposite end of the channel, depending on the time frame.