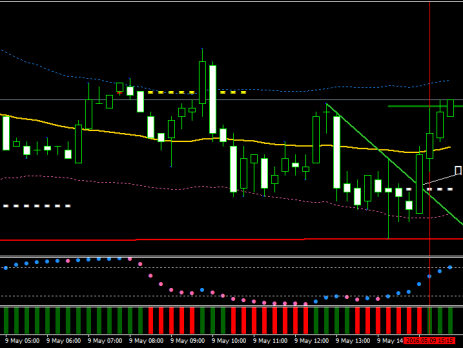 The “DSS Scalping” system is based on the idea of accelerating the trend and price behavior. It is intended for trading inside the day on timeframes of 5 minutes and higher. However, this system works well at market turns. Can also be used to trade binary options. For binary options, the expiry time is 4-6 candles. The “DSS Scalping” system can be used for trading in the Forex market, indices and commodities. In case of trading in goods, the recommended time frame is 30 minutes. This can be oil trading on the forex market or gold trading on the futures market. The main indicator of the system, from which it was called “DSS Bressert”. DSS Bressert (Double Smoothed Stochastic Indicator by Walter Bressert) is a new version of traditional stochastic, modified to reduce the number of false signals. The indicator works with levels 20 and 80 to exit the overbought and oversold zones, replacing the usual Stochastic, increasing the quality of signals. For the convenience of analysis, the “DSS Bressert” indicator line contains points that display the position of the chart bars in order to see exactly when the signal appears. Oscillator parameters are stochastic and EMA periods. The “ATR MA Bands” indicator plays an important role in the system. Further movement can be determined by the direction of the channel and the price behavior at its borders. Another important indicator is the “De Mark Trend line trader”, which draws a triangle of trend lines and the purpose of the movement in case of a breakdown of these lines. On the main chart there is an auxiliary indicator “Support and Resistance”, which determines the current support and resistance levels, as well as information indicators. In the lowest window of the terminal there is a filtering indicator “Forex profit supreme Filter”

Example of opening a Buy position with a transaction duration of about an hour. The following conditions are met here:

2. Price is above the support level

In this case, the stop should be set below the red line “De Mark Trend line trader”, and take profit on green, or on the upper boundary of the channel “ATR MA Bands”.

Here the price is in the triangle, and the indicator “DSS Bressert” shows oversold. That’s why we have to wait.

Example of opening a Sell position with a duration of about eight hours. The following conditions are met here:

2. Price is below the support level

In this case, the stop should have been set above the yellow resistance line, and the take profit on the red line of the “De Mark Trend line trader” indicator, or on the lower boundary of the “ATR MA Bands” channel.