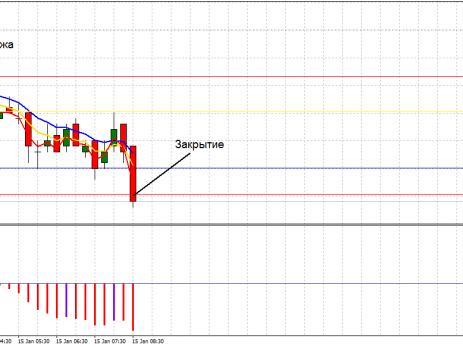 This forex strategy is characterized by short trading terms. The system is used for currency trading on a 15-minute chart. It can be used on any asset, but it works best with currency pairs that have strong trends. Trading signals of the system are based on three exponential middle lines (EMA). It’s a low EMA of 2, 5 and 10. That’s why the system got its name. The “Forexoma_MACD” indicator is used to filter signals in the system, which is a modified version of the usual MACD indicator. Unlike the usual version of MACD, the Forexoma version differs in color. As soon as the MACD bars begin to show a change in direction, the color changes. The essence of this modification is to catch the trend change much earlier than in the usual MACD indicator, which changes from positive to negative or from negative to positive, which causes a delay.

The position for sale is opened as soon as 2 EMA or 5 EMA cross the downwards EMA10. The “Forexoma_MACD” indicator bar should be red. The stoploss is set at the local maximum, and the takeprofit is fixed at a rate of no more than 30 points.

In this case, the position to buy opens when EMA 5 crossed the top of EMA 10, and the color of the bar “Forexoma_MACD” changed to blue. Here the position is closed when the EMA 2 crosses back down. After that, you can sell again right away.

Stoploss and takeprofit here are conditional. These parameters are left to the trader’s discretion.