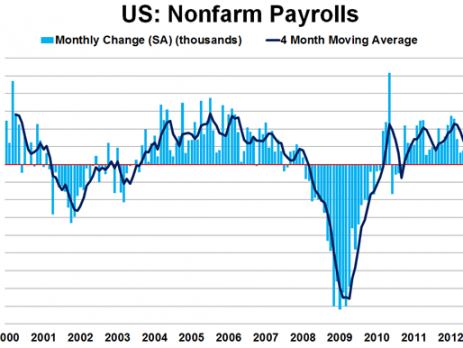 Non-Farm Payrolls (Figure 1) is an estimate of the “health” of the U.S. economy and is based on data on employment in non-agricultural sectors. In fact, employment data is one of the determining factors in international financial markets. They are the ones that show the real state of the economy, linking it to the unemployment rate, the volume of newly created jobs, staff cuts, etc. Non-Farm Payrolls indicator is used to analyze data on the employment of the U.S. population and allows, based on the study of statistics in the long run, to make fairly reliable forecasts about changes in exchange rates in the near future. Due to the importance of its values, Non-Farm Payrolls indicator is often correlated with other key market indicators – the level of income of the population, the dynamics of industrial production and GDP. It is assumed that the growth of this indicator by 200,000 units is equated to a three-percent growth of gross domestic product.

U.S. nonagricultural employment reports are published monthly on the first Friday of the new month following the reporting month at 12:30 a.m. for GTM. In addition to data directly indicating the employment rate of the population, the report also provides information on the number of hours worked and the amount of wages paid in each sector of the economy being considered. You can find this data, as well as specify the date of publication of a new report in any of the economic calendars.

Non-Farm Payrolls indicator always causes significant fluctuations of the market, not without reason it is referred to the category of signals “moving the market”. On the date of release of the new report there is always a surge of volatility – this is the factor that attracts “news traders”, who use this indicator every month to make a profit in the short term. It should be taken into account that there are similar indicators for the economies of such countries as Canada, Switzerland, Germany and Australia. But the release of statistics on them never causes such a stir as the publication of data on the U.S. employment market.

How to trade on Non-Farm Payrolls indicators?

Trade based on US non-agricultural employment data does not require lengthy forecasting and calculations. It is based on a direct correlation between the growth of the indicator and the growth of the North American currency. Accordingly, the fall of the indicator indicates a negative economic outlook due to a decrease in the number of jobs, and this inevitably leads to a fall in the U.S. dollar

Entering the market by trading on the Non-Farm Payrolls indicator is worthwhile if the change of indicators during the reporting period exceeded 40 000 units. The higher this fluctuation is, the more likely it is that you will be able to make a lot of money quickly. The main thing is to orientate oneself in the direction of price movement in time and do not forget to set restrictions that allow to fix profit before the price rollback starts.

Strategy for trading on Non-Farms Payrolls

For successful trading on Non-Farm Payrolls, the following recommendations are required:

1) Open two oppositely directed pending orders at a distance of 20 – 25 pips from the current price level three to five minutes before the release of the busy data.

2) It should be taken into account that immediately after the news release the market will make a sharp breakthrough, and its direction is sometimes almost impossible to predict. That’s why stop-loss and take profit levels in this case should be set at 20 – 25 points from the entrance to limit losses and at 30 – 70 points to fix profits. Such a wide range is associated with high market volatility, which can produce unpredictable reactions to the news.

3) After a news release, events may develop as follows

– absence of noticeable market reaction, which leads to the fact that none of the orders has worked – in this case they are simply deleted;

– price movement in the chosen direction and closing of the deal to reach the take profit level;

– price movement in the right direction, but with insufficient force – in this case, the growth values do not reach the level of automatic closing in profit. In this case, you should set the trailing stop at 10 points instead of the stop-loss level, and wait for the maximum price values to be reached, minimizing the risks and closing the transaction manually or automatically (when the limit is triggered when the market rolls back);

– price movement can also provoke a situation in which two pending orders will be opened. The price will not reach the take-profit level in any direction. In this case one of the deals is guaranteed to be closed by the level of loss limitation, and the second one will be closed either manually or after it reaches the level of closing in profit (provided that it is set within an acceptable range).

If the market does not show the dynamics when trading on Non-Farm Payrolls, making fluctuations in the range of ten and a half tens of points – this is a signal to the need to close the deal at the current price values, indicating the prospects of a rapid reversal of the trend direction. At the same time, after fixing the reversal, it is already possible to open a deal according to the newly formed trend with setting the level of stop-loss at 20 points and “manual” fixation of profit at a decrease in the activity of price indices growth.