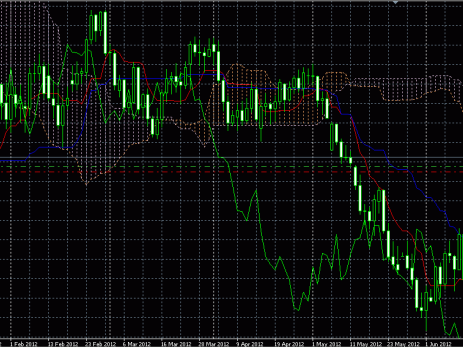 Ishimoku indicator is one of the methods of technical analysis of Forex, which allows you to assess the trading situation in the complex, based on the data of not one, but several indicators at once. Its application allows not only to successfully analyze and evaluate the prospects of the markets, but also makes it possible to build strategies based on trading by trend or support levels, accurately determining the development of the trading situation in the near future.

The history of the Ishimoku indicator dates back to the 1930s, when Japanese analyst Goichi Hosoda created his own trading system aimed at forecasting changes in the Nikkei index. It was he who had been working on the improvement of this analytical tool for a long time, as a result of which he got a high-precision indicator, which allows to conduct almost breakeven trading.

For most modern traders the Ishimoku indicator (Fig. 1) is a tool available in the basic list of MetaTrader 4 terminal. It can be selected from the “Ichimoku Kinko Hyo” tab and applied to any chart by setting the control period and selecting the colors to display the lines of each instrument on the chart

Market analysis using the Ishimoku indicator is based on moving average prices. In total, 5 lines are shown on the chart and three time periods are used. Traditionally, Ishimoku is used for long-term forecasting of the situation and is most often analyzed in work with it daily or weekly time frames (timeframes). Tenkan-sen – displays the average prices for the first time interval.

Kijuin-sen – displays the average prices for the second time interval.

Chinkou Span – the level of the price index at the moment of closing, with an offset for the period of time, chosen by the second as the measurement parameter.

Kumo Up (Senkou Span A) – average distance from the line Tenkan-sen to Kijuin-sen with a forward shift equal to the size of the second time period.

Kumo Down (Senkou Span B) – average price indices for the selected third period of time, are calculated with an offset for the period equal to the size of the second period.

It is Kumo Up and Kumo Down that make up the so-called Ishimoku cloud, the area displayed within the chart, indicated by linear price resistance and support limiters. Finding the price within this corridor means the absence of a strong trend and finding the price in the flat period. The price movement beyond the limits of levels/lines shows the presence of trends, and its local peak values automatically become support levels (in case of a bullish trend) and resistance levels (in case of a bearish trend).

Line Chinkou Span – a long-term indicator, shows the trends of price indicators in the near future. It is the coincidence of this line with the chart of price movement that demonstrates the location of the most promising entry points into the market. It is important to bear in mind that crossing the lines from bottom to top signals the need for implementation, and from top to bottom – the need to purchase assets.

The Tenkan-sen line on the Ishimoku indicator chart determines the market reversal points and, in general, demonstrates the direction of the current Forex trend. The location of the price above this line indicates the presence of a bullish, uptrend. The price is below the line – about the influence of the downward, bearish.

The Kijun-sen line determines the prospects of price indices movement in the future (similar to the charts of moving averages). In fact, it is the basis for forecasting the market situation.

1) The signal indicating the occurrence of a period favorable for opening positions is formed by crossing two lines – Tenkan-sen and Kijun-sen. A crossover that crosses the lines from below and tends upwards is an obvious signal for the acquisition of assets. Such a figure on the chart is also designated as the “Golden Cross” (Fig. 4). The crossing of lines formed by the movement from above and going down is an obvious indicator for the implementation of available assets, the game to sell. This combination is called the “Dead Cross” (Fig. 3). 2) Crossing the Kumo Up and Kumo Down support lines also gives an obvious impulse to enter the market and start trading. Provided that Senkou Span A crosses line B in the direction of movement from the lower part of the chart to the upper part – it can serve as a signal for the acquisition of assets, cross lines in the direction of top-down – for their implementation.

3) If the price starts from the pivot point (Tenkan-sen line), it indicates the end of the correction period and the formation of a new market direction offering to make a deal to buy or sell. According to the same principles, the rebounds from Senkou Span and Kijun-sen lines are treated with the only difference that these data can be considered more reliable due to a longer period of market observations.

4) If there is a repulsion from three lines at once (Kijun, Tenkan, Senkou Span B) on the price movement chart, it indicates the formation of a new trend. Entry into the market in this position of indicators is carried out in the course of further development of the momentum of market movement.