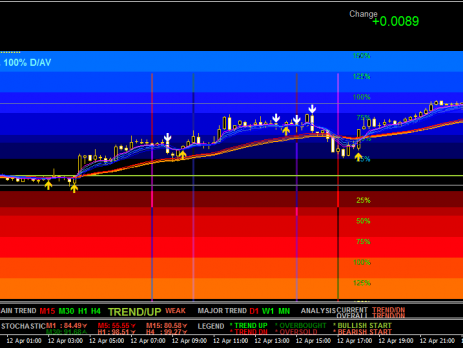 This system is designed for trading on the Forex market during the day, that is, European and American sessions. The “Dolly Forex” system can be used for any currency pair of the Forex market. Charts M15 and M30 are used to analyze and open positions. It is also necessary to choose a reliable broker with fast execution of orders. These include, for example, bank brokers. The system is based on the original indicator “Dolly_Graphics_v11-GMTShift”.

This indicator shows the buying and selling areas with different shades of colors. It also determines the opening price and the purpose of the price movement. In the upper left corner of the terminal the main information on the traded pair is displayed. The “Dolly_Trading Times _3” indicator shows the opening and closing times of the European, London and American sessions. For the correct operation of this indicator it is necessary to adjust it according to your local time. The main chart also has eight exponential moving averages with periods of 6, 8, 10, 12 and 33, 36, 39, 41. They are painted in different colours and can be used to identify changes in trend at an early stage. Arrows of the “MA2_Signal” indicator show possible entry points into the market. The system includes two information indicators – “b-clock modified” and “Clock v1_2_auto”. In the two lower windows of the terminal there are indicators “DIGISTOCH” and “GMACD_Signals”, which specify the direction of movement on different timeframes.

On this screenshot you can see that the price is in the shopping area during the trading sessions of Europe and America. Positions to buy are opened after the yellow arrow of the indicator “MA2_Signal” appears. The blue lines of the moving averages should be above the red lines. It is also necessary to clarify the trend on other timeframes. Closes positions when white arrows appear or when system targets are reached. In the example above you could open four deals, three of which were successful. The stoploss is set below the signal candle.

Here the price enters the sales zone only after the opening of the London session, then goes into the neutral zone and again enters during the American session. Positions for sale are opened after the white arrow of the indicator “MA2_Signal” appears. The blue lines of the moving averages should be below the red lines. The trend on other timeframes is specified by the lower indicators. Closes positions when the red arrows appear or when the system targets are reached. In this case, you could open three deals, two of which were successful. The stoploss is installed above the signal candle.