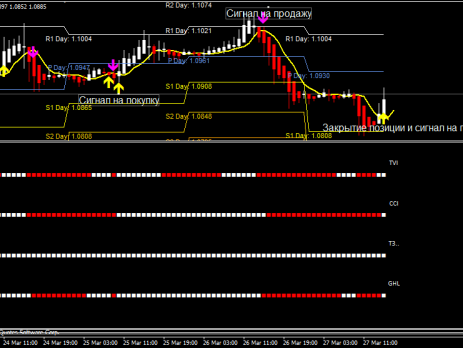 The trading system Genesis Matrix Trading has been created for a long time by the traders’ community. For more than three years it has been discussed and improved at the world’s largest Forex forum. The result is a strategy based on indicators with a minimum delay and maximum accuracy. Although it is an intraday system, it can also be used on higher timeframes. Profitability and reliability of this strategy has been proved by many traders. The system shows the best results on timeframes from 1M to 15M and currency pairs EUR/USD, GBP/USD, EUR/GBP, EUR/JPY. The main time of trade is the European session.

The basis of the system is the Genesis indicator in the form of white and red cubes. It, in turn, consists of four indicators – TVI, CCI, T3 and GHL. The matching colors give signals to open positions. The system also uses two Stochastic indicators. One shows the situation on M15, and the other serves as a filter on the current timeframe. The FXI Pivots indicator is used to determine support and resistance levels. These are specific boundaries that the price can stop or bounce off when approached. They are very important when putting up a stop-loss and closing positions. To open a position, several conditions must be met. The main thing is that the indicator cubes of Genesis become the same color. Or at least three if the other conditions are right. Stochastics lines should cross over and leave the overbought or oversold area(20/80). The HeikenAshi candle should close above/below MA5. Stochastic M15 should be directed towards the deal. Last, but not least, the Arrow indicator arrow appears.

Positions are closed mainly when the indicator cubes of Genesis change color to the opposite one. Support and resistance levels and round numbers can also be the targets for exiting the deal. Stop-loss is set a little higher or lower than local lows and highs. It should be taken into account that if the level of stop-loss is higher than the potential profit, it is better not to enter the deal. It is also recommended that when a profit of 20 pips is reached, a position should be put into a breakeven position and any position should be closed at the end of the European session.