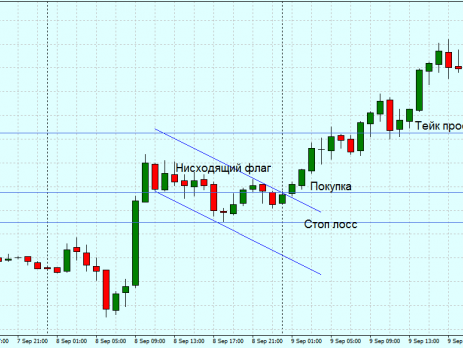 This trading system is based on the analysis of price behavior. The concept of “Price Action” implies determining the most probable development of events on the market, based on various figures of technical analysis and combinations of candlesticks (patterns). The fact is that all the indicators show the past, and it is possible to determine the future by repeating patterns and to detect the formation of a trend at the beginning. One of the figures of technical analysis is the flag. It usually occurs after a strong market movement, when prices stop before the trend continues. Flags appear, mostly in the middle of the trend. Depending on the direction, there are bull and bear flags.

The bull flag is formed on an uptrend. The figure is characterized by a narrow price fluctuation. If we connect the lows and highs with trend lines, we get a small channel located horizontally or with a slight slope down.

A bearish flag can be seen on a downward trend. Its difference from the bull flag is that it is located horizontally or with a slight upward slope.

This system can be used for any currency pair. Charts for trading should be from one hour and above. As a trend indicator, you can use a moving average with a period of 100. If the price is higher than it is, we buy it, if it is lower, we sell it

Example of a purchase. A bull’s-eye flag was formed on the rising trend. Buy after crossing the upper trend line of the channel. The stop-loss is installed at the lower edge of the channel. When working with hourly charts, the number of takeprofit points is equal to the size of the stop loss

Example of a sale. A bearish flag was formed on the downward trend. Sell after crossing the lower trend line of the channel. The stop-loop is mounted on the upper edge of the channel. When working with four-hour charts, the number of Take Profit points is equal to or twice as high as the Stop Loss. One should also take seriously the question of how to choose a forex broker.