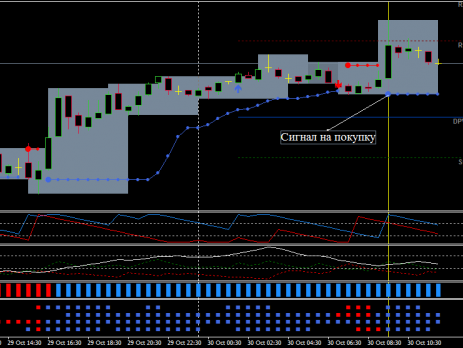 “Aroon up down trading system” is an intraday trading system based on trend acceleration. Daily Forex trading strategies – according to the data of numerous researches – bring big profit to traders. At the same time, they’re more risky.

This system combines trend and impulse (acceleration) indicators. This system can be used on any currency pairs and indices. The main timeframes for trading are 1 hour and 30 minutes. In addition to it, well-known indicators of the RSI (relative strength index) and ADX (Average Directional Movement Index) Metatrader are used to determine the entry points into the market. To clarify the levels of entry and exit from transactions in the system the indicators “S-ROC” “Bollinger Band Stop” and “Pivot Point” are used.

There are also four additional indicators in the system to help you make good decisions. The indicator “1 – GG trend bar” at the trend upwards colored bars in green, at the trend down in red, and at the flute in yellow. The “Tips” indicator shows the trend direction on all timeframes. The “2-and AIMS box” indicator highlights rectangular sections of the chart (boxes). If the box is large and the price is out of its range, it is a signal to open a position. If the box is small, and the price is inside it, it is worth waiting for its borders to be broken through. And the last indicator “3-Matrix ACRA” shows how much the CCI, ADX, RSI and Aroon readings coincide.

To enter the buying market, the blue line of the “Aroon up & down” indicator should cross the red line up and be above the level of 70. The price should be higher than the blue points of the “Bollinger Band Stop” indicator. The ADX should be greater than 20 and the green line above red. The S-ROC bars should be blue and 3-Matrix ACRA shows all squares in blue. Stop-loss is set at the previous minimum, and take profit at the resistance levels of the indicator “Pivot Point”.

To sell, the red line of the “Aroon up & down” indicator should cross the blue line and be below 70. The price should be lower than the red points of the indicator “Bollinger Band Stop”. The ADX should be greater than 20 and the green line below red. S-ROC bars should be red and 3-Matrix ACRA shows all squares in red. Stop-loss is set at the previous maximum, and take profit at the support levels of the “Pivot Point” indicator.