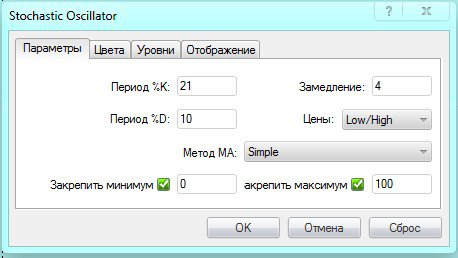 Stochastic indicator on its own can only be partially useful, but if you combine its two varieties, fast and slow, you can use it in trading on the currency market.

Forex Dual Stochastic Trade’s trading strategy is based on combining slow and fast Stochastic oscillators and finding cases when these two signals are in opposite extremes. Extremes are defined as 80% and 20% levels (illustrations below give a better idea).

The only additional indicator that may be applicable to this strategy is the 20 EMA. The settings for the two stochastics are as follows:

For the MetaTrader, these settings are shown in the diagrams below (color selection, of course, is your business): In the examples below, both stochastics are combined in one window at the bottom of the MetaTrader chart. It’s very easy to do. First, install one oscillator and then drag and drop the second one onto this window. A dialog box to enter the settings will appear automatically.

The basic rules are as follows:

-Watch the Stochastic indicators, waiting for the extreme readings

-Then we wait for the corresponding candlestick model to confirm the input, which signals a turn after correction in the direction of 20 EMA.

To determine the trend, you can also use the middle line of Bollinger Bands instead of 20 EMA.

Below are some examples of trading on hourly charts, as it is a good timeframe to trade on this strategy. The circles indicate the possible entry to the sales on the downtrend. Note that the slow stochastics (yellow bar) indicate oversold and the fast stochastics (blue bar) turn down when overbought.

The third example is slightly inconsistent with the rules, as slow stochastics began to rise from the oversold area. On the other hand, the price has just made a double top and has fallen convincingly. In such cases, the choice remains with the trader. Illustration of the classic entry into sales on a confirmed downward trend. Note how flat and resold the slow stochastics are. Rapid stochastics make jerks into overbought areas. The first circle indicates a close to the classical entrance, as the price bounced back from the old support and drops. The second circle points to a fine example of an evening star around 20 EMA, but this entry would likely lead to a loss, or at least a balanced result. It’s clear that strategy isn’t always perfect.

It’s an intuitive system, not necessarily used in a mechanical, automated way. You should always use it in combination with other signals, and always taking into account the time of day, session, liquidity, etc., which prevails at the time you trade. Bank brokers will ensure the safety of your funds.