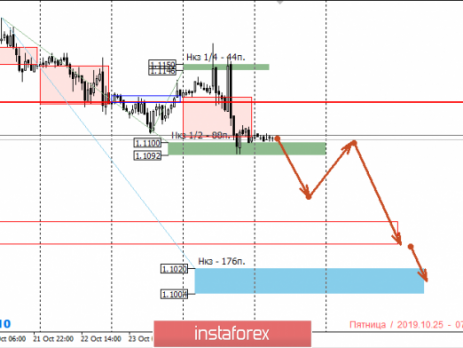 Yesterday, the pair reached the critical support zone of NKZ 1/2 1.1100-1.1092. The test of this zone will be crucial for further trade. Since the zone is within the limits of the monthly short circuit, the purchases from its limits are not profitable and it is better to refuse them. The probability of closing trades within a month’s average move is 70%. Closing of the trades this week below the level of 1.1092 will give an opportunity to sell the pair again on Monday.

The alternative model will be developed in case today’s auction closes above NKZ 1/2. This will give an opportunity to sell in the future at a more favorable price. The probability of the uptrend resuming is less than 50%, which does not allow to use the test zone to enter the purchase. Daytime CP is the daytime control zone. An area formed by important data from the futures market, which changes several times a year.

Weekly short-circuit fault is a week-long control zone. An area formed by important marks of the futures market, which change several times a year.

Monthly short circuit is a monthly control zone. Zone, which is a reflection of the average volatility over the past year.