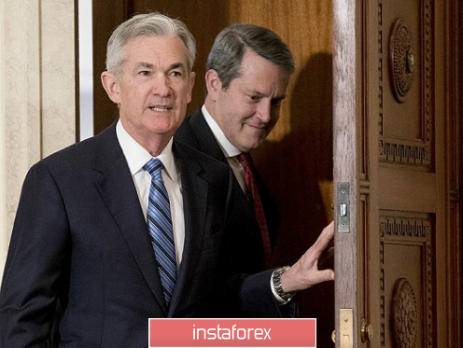 For the third time in a row, the Federal Reserve System reduces the refinancing rate, which in itself should be seriously frightening. However, the decision to reduce the refinancing rate from 2.00% to 1.75% did not lead to serious consequences. And only partially it is connected with predictability of results of the meeting of the Federal Committee on Open Market Operations. First, the decision was not unanimous, as two votes were in favor of maintaining the refinancing rate at 2.00%. Second, external factors, such as the increasing risks of a slowdown in global economic growth, were cited as the reason for the decline, while the state of the U.S. economy does not cause any concern on the part of the Federal Reserve System. On the contrary, it is noted that the labor market continues to be in excellent condition. Although it is regretted that the increase in employment, and with it in consumer spending, does not lead to a corresponding increase in investment in fixed assets. Also, concern was expressed once again by the fact that inflation is below the target level of 2.0%. However, it is worth noting that in the press release, the current inflation rate is 1.8%. That’s exactly what Jerome Powell said during his press conference. Only inflation in the United States is 1.7%. And it has been at this level for two months now. Given the extreme meticulousness of structures such as the Federal Reserve System, it is difficult to imagine that this is a trivial caveat. Most likely, thus, the Federal Reserve System hints that it is waiting for inflation to rise. And he does it as if he has no doubts at all. Therefore, we should not wait for further easing of the monetary policy. In addition to the meeting of the Federal Open Market Operations Committee, there were other interesting events yesterday. Which, to a large extent, had a beneficial effect on the dollar. Thus, the ADP data showed an increase in employment from 93,000 to 125,000, while only 120,000 were expected to increase, however, the increase in employment rates became possible only due to the revision of previous results, from 135,000 to 93,000. Also, the first assessment of GDP in the third quarter, although it showed a slowdown in economic growth, still not as strong as expected. Economic growth slowed down from 2.3% to 2.0%, while fearing it would fall below 2.0% for the first time since 2016.

A lot of important data has also been published in Europe. Thus, in Spain, the fourth economy in the euro zone, inflation remained unchanged, although it was expected to decline from 0.1% to 0.0%. France, which is the second economy in the euro zone, reported a slowdown in economic growth from 1.4% to 1.3%. Even if it is a preliminary estimate, it still points to the extremely low rate of economic growth of the Old World as a whole. FLaghmann of Europe, which is Germany, has reported stable unemployment rates, combined with a slowdown in inflation from 1.2% to 1.1%. Simply put, one shouldn’t even hope for the possibility of rising inflation in Europe.

As we can see, the lack of desire of the dollar to weaken is not surprising, as the situation in Europe is clearly worse than in the United States. So the dollar may well resume its growth, if there is a good reason, in the form of next macroeconomic data. However, the American statistics themselves do not please us today with abundance. In fact, there is nothing interesting except data on unemployment claims. The total number of these same applications should increase by 3 thousand. Thus, the number of initial applications is expected to increase by 5 thousand, while the number of repeat applications will decrease by 2 thousand. However, data on personal income and expenses are still published, which may increase by 0.3% and 0.2% respectively. However, it should be noted that in the previous month, income and expenses increased by 0.4% and 0.1%, respectively. In other words, the face of accelerated spending growth, which should lead to increased inflation. Which means Jerome Powell wasn’t tricked when he made the 1.8% inflation clause. But in Europe today there are a lot of very important data published. Some of which are already out. For example, retail sales growth in Germany accelerated from 3.1% to 3.4%, which can be seen as a positive factor. However, we expected acceleration up to 3.5%, and the previous value was revised for the worse, from 3.2% to 3.1%. So the potential for inflation growth in Europe is decreasing day by day. And in confirmation of this thesis, France reported a slowdown in inflation from 0.9% to 0.7%, with a forecast of 0.8%. Now they are waiting for data from Italy, the third economy of the euro zone, where the unemployment rate is expected to rise from 9.5% to 9.6%. In addition, Italy forecasts a slowdown in inflation from 0.3% to 0.2%. But the greatest interest is in the pan-European data. The only thing that does not cause concern is the unemployment rate, which should remain at the same level of 7.4%. Everything else makes you tear your hair on your head. The first estimate of GDP for the third quarter may show a slowdown in economic growth from 1.2% to 1.1%, and the preliminary data on inflation, its decline from 0.8% to 0.7%. At the same time, given the data coming out for the largest euro zone countries, there are concerns that the data will be worse than predicted.

The Euro/USD currency pair managed to draw a remarkable impulse candlestick at the expense of the general information background, practically returning us to the limits of the previously found resistance level of 1.1180. Subsequent oscillation reflects the deceleration, but it is most likely an intermediate point before retraction, which is very possible in this case. The currency pair pound/dollar was more measured in its actions than the single currency, but there was also an uptrend here. It is likely to suggest that a characteristic slowdown may occur if there is no clear passage at 1.2955. Slowing down with variable boundaries is possible relative to the values.