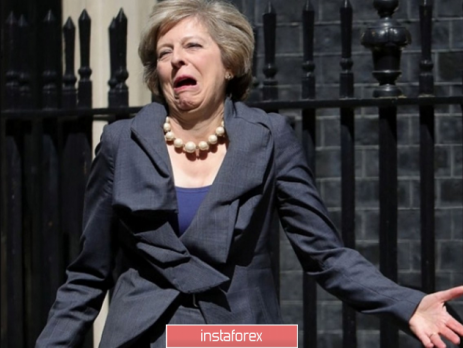 A completely empty macroeconomic calendar, with the exception of consumer lending data in Europe, which remained unchanged, although it should have accelerated from 3.4 per cent to 3.5 per cent, contributed to the realization of a technical rebound. That the single European currency, that the pound could slightly strengthen its position, which they lost over the past few days, when market participants were seriously excited about another confusion around Brexit’s. British politicians once again managed to confuse everything so that no one is able to figure out what is really going on. It seems that even the British political class itself no longer understands anything. Luckily, yesterday British politicians remained silent, apparently trying to understand everything that they did. Today, the situation, at least with macroeconomic statistics, is somewhat better. Thus, the data of Nationwide have already shown that the growth rate of housing prices in the UK accelerated from 0.2% to 0.4%. So this is a certain positive for the pound, as the state of the real estate market is one of the main criteria for investment attractiveness of the United Kingdom. However, there will still be data on the lending market, which can spoil the pleasant picture. The volume of consumer lending should amount to £0.9 billion. Exactly the same amount as last month. It means that the consumer credit market is stagnant. Moreover, the number of approved mortgage applications could be reduced from 65,545 to 65,000. So we can say that the British statistics today will be purely neutral.

No data are published for the euro zone as a whole today, but some data are available for a number of large European countries. Thus, in Spain, and this is the fourth economy of the euro zone, published data on retail sales, the growth rate of which should remain unchanged, at the level of 3.2%. In Italy, which is the third economy in the euro zone, a slight improvement in producer prices is expected, as the rate of decline should slow down from -1.4% to -0.9%. It’s still a price reduction, though. And the data itself isn’t that important.

If we talk about the United States, the macroeconomic statistics here too will be neutral. On the one hand, the data of S&P/CaseShiller should show acceleration of growth rates for housing from 2.0% to 2.1%. At the same time, however, at the same time, the growth rate of unfinished housing transactions may slow down from 2.5% to 1.4%, which will indicate a decline in activity in the real estate market in the future. And it should not be forgotten that tomorrow the results of the meeting of the Federal Open Market Operations Committee will be known, so that many market participants will simply not want to take risks.

After reaching the resistance level of 1.1080, the euro/dollar currency pair entered the pullback phase without showing high volatility. It is possible to assume a temporary fluctuation within the range of 1.1080/1.1105, where it is necessary to carefully analyze behind the points of price fixation. The currency pair pound/dollar does not show sharp jumps recently, as well as high volatility, the only thing that is the technical rollback, followed by a slowdown. It is likely that a sluggish fluctuation within the range of 1.2810/1.2865 will remain in place for today, where in terms of analysis we monitor the behavior of the quote and the points of subsequent price fixations.