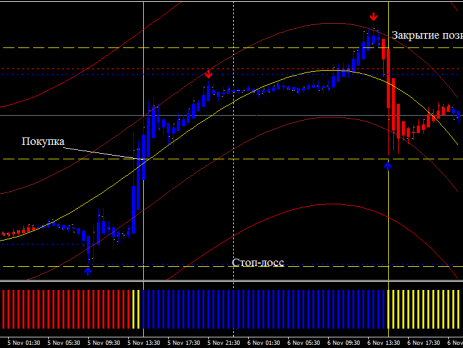 Bufu Trend” trading system is a trendy one. It is based on the principle of following the trend as defined by indicators. The system is applicable to all currency pairs. “Bufu Trend” is a medium-term system, as the main timeframes are 30 minutes and 1 hour. Usually deals are closed within two or three days.

The choice of direction is based on the author’s indicator “Bufu trend signals”, which is displayed in a separate window with blue, yellow and red bars. The “Stochastics candles” indicator confirms the same with the color of candlesticks. Finally, the “Trend Channel indicator” clearly identifies the direction of movement. In addition to the main task, this indicator shows the overbought and oversold areas. If the price is approaching the red lines above and below yellow, a reversal is possible. The “Wave Arrows” indicator indicates possible entry points with blue and red arrows. And the “Support and resistance” indicator shows strong support and resistance levels with blue and red dots.

Example of opening a position to buy. The Stochastics candles are blue. The “Trend Channel indicator” lines are directed upwards. After the blue arrow “Wave Arrows” appears and the bar “Bufu trend signals” changes its color to blue, you can buy it. The stop-loss is set below the last local minimum. In this case, the deal is closed after the candlestick color changes to red and the yellow bar “Bufu trend signals” appears. But this approach can not always be recommended, as there is a possibility of losing most of the movement. It is possible to set the fixed take-profit at a distance twice as large as the stop-loss. Or close the deal when one of the signs of a reversal appears. Another option is to exit at a strong level of resistance.

The rules for sales are the same, but with the change of colors and direction. Stochastics candles should be red. The “Trend Channel indicator” lines are directed downwards. After the red arrow “Wave Arrows” appears and the bar “Bufu trend signals” changes its color to red, you can sell it. The stop-loss is set above the last local maximum. In this case, the deal could be closed at a strong support level or after the blue arrow appeared. After the red arrow appears, the position can be restored, as the rest of the conditions for sales are preserved.

There are various variants of this system with the addition of additional filters. But for novice traders it is better to use this easy to understand option.