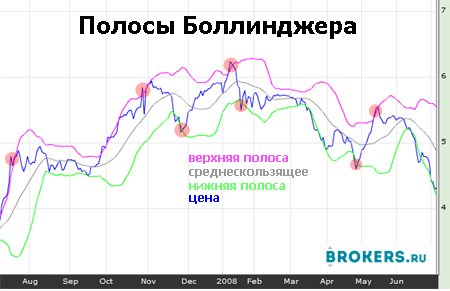 In Forex trading, there are a lot of trading indicators that are trusted by traders. Bollinger Bands tactics belongs to this category – powerful analytical tools that can significantly simplify forecasting and reduce risks in the process of making trade deals. In fact, the Bollinger bands are based on two forces that have a significant impact on changes in charts – the main axis of the current trend price range and the change in indicators (compression/expansion) in the process of price movement. It is on the interaction of these two factors that the figures on the charts are created, which are formed when bars pass through the established boundaries. Bollinger Bands represent three lines intended for the most accurate determination of extreme prices for the current period of time and are the most effective short-term indicators within the framework of technical analytics. Accordingly, the upper and lower bands determine the boundaries of oversold/overbought of the traded asset and price movements within them can be quite reliable evidence of the current state of the market situation at a given time

Bollinger Bands tactics allows you to effectively use them in active interaction with other indicators, in particular – with Japanese candlesticks, allowing you to predict changes in the market in the near future. The efficiency of Bollinger bands as indicators is conditioned by their quick reaction to changes in price indices. Wave curves of this indicator allow predicting the range of trend movements with a high degree of probability, but only if the trader has sufficient experience in interpreting the values of these types of graphical constructions.

Especially important is the experience of working with Bollinger Bands when compressing the price band – in this case, you can expect a stop in the trend movement, and the force of the bands compression on the price may be different and it is difficult to calculate exactly how great the influence will be, is not easy. But the efforts to master the Bollinger bands tactics are worth it – it is this indicator that makes it possible to determine as accurately as possible the presence of implicit price fluctuations and allows you to establish the positive dynamics in the direction of profit within the framework of the transaction.

But it is also worth remembering the peculiarities of Bollinger Bands tactics, such as the higher accuracy of time indicators, outpacing the accuracy of price parameters. Fluctuations in the bands may be limited to a small distance from the local maximum or minimum values, and may even roll back positions that indicate the proximity of a new trend activity impulse. However, as a rule, the stop of the lanes movement can be noticed in case of the decrease of its indices in the growing lane or growth in the falling one. And the appearance of sidebands is possible both in the market with a pronounced trend, and in its calm state. In this case, the price values are often unable to reach a new level of minimum or maximum until there is a graphical expansion of the bands, indicating the emergence of opportunities for free price movement.

When choosing the Bollinger bands tactics, it is very important for a trader to track changes in charts. In particular, significant divergences in the stripes’ upper bounds and other indicators usually serve as a signal for a possible breakthrough, the moment of which is usually when the price reaches the level of the band’s base. It is also important to monitor the level of slope of the bands when reaching/approaching the price minimum/maximum levels. It is these data that serve as the basis for calculating the required time period and applying forces that will allow us to catch the moment that is favorable for a breakthrough in the price of the achieved resistance/support barrier

The most effective use of Bollinger bands tactics is achieved by monitoring the change in graphs in real time. It is with the help of this indicator that it is possible to test the parameters of the minimum/maximum price levels, which are currently in effect, and which need to be checked again. Bollinger Bands are also useful in early trend change forecasting. A noticeable change in the activity of price indices movement is fixed on the chart by a significant increase in the width of the bands, followed by their narrowing under the change of market activity. It is the combination of these factors that can serve as a pre-emptive signal for the trader, allowing to determine with rather high accuracy the moment of trend change, which is marked by a fast and short market movement in the vertical dynamics.

You can reduce trading risks when using Bollinger Bands by reducing the time scale and waiting for the reversal required to enter the opposite position to the current trend. In addition, it effectively reduces the degree of risk by using not only bar indicators, but also other forms of resistance/support as evaluation criteria. In this case, the trader has an opportunity to make an additional check of the level of market entry. It is also worth paying attention to the parameters of price rollbacks. If it does not leave the bands, and there is no other reason to assume a reversal trend, it is possible to predict with a high degree of probability a return to the trend direction, the timely prediction of which can give a good profit

In the process of trading with the use of Bollinger Bands as indicators it is necessary to apply such a variant of risk reduction as simultaneous application of three different time scales for charting. It is this tactic that allows you to timely notice the emerging changes in the market, which are not displayed on the main chart. At the same time, the take-profit and stop-loss limits should be set based on the parameters of the main chart, on which the trade is based

Of course, experienced traders working within the Bollinger Bands tactics are well aware of how effective is the simplest way of using this indicator, in which the signal to buy is a breakthrough of the lower band in the oversold market. Of course, a breakthrough immediately provokes an increase in market activity and, in most cases, a rapid correction and further return of price indicators to the trend with subsequent growth. It is only important not to forget about such an integral component as a stop-loss level, which will help to cope with the situation if it develops in a negative scenario. It is this kind of reasonable risk management, together with the right indicators and other analytical tools, that always brings tactical success in Forex.