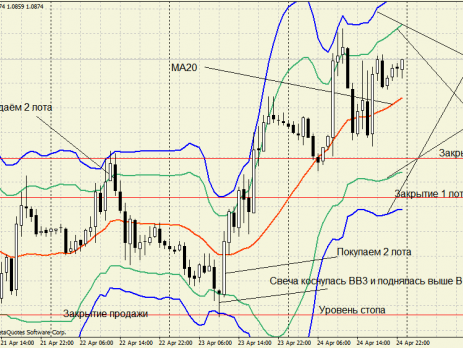 This strategy is based on the Bollinger Band (BB) indicator. It uses two pairs of Bollinger Bands. Settings of one – 2 standard deviations, settings of the other – 3 standard deviations. The middle line setting is standard with a period of 20. The strategy is applied on hourly candlestick charts. The initial position of the system is that the internal Bollinger Bands serve as an indicator of trend reversal or return to the flute. If you open a purchase when the price touched the lower BBL, you can get very large losses, especially a steady trend. When the price crosses the Bollinger’s internal bands, a more accurate reversal signal is obtained.

The system shows the best results in pairs with Euro – EUR/USD, EUR/CAD, EUR/JPY System rules. 1) First, the price should touch the BB line with deviation 3, showing the market extremum. 2) After rebound, the price must cross the BB line with a deviation of 2. 3) Signals to open positions are received by candlesticks, which are formed between BB 2 and a simple moving average with a period of 20. For a sell signal, the maximum of the candlestick must be Lower BB 2 and the minimum of the candlestick must be Bigger, the middle line with a period of 20. For a buy signal, the minimum candlestick should be higher than BB 2, and the maximum should be lower than the average SMA with a period of 20. 4) Then make sure that one of the previous candlesticks touched BB 3. We open the position only when this condition is met. The position is opened by two lots at the beginning of the next candle. It is necessary to make sure that the extreme is formed. It happens that the price cannot cross BB 2 within a few candlesticks after touching BB 3, and this may be a sign of a continued trend. In this case, you should avoid opening a position. 5) Stop loss is set at the BB level 3. BB 3 for the previous hour is then applied as a stop. That is, the stop follows the BB line 3. 6) When the price reaches the opposite BB line 3, we fix the profit by closing one lot. This will ensure the profitability of the position. 7) Then trailing stop is used. Once the first target is reached, additional profit can be made if the price continues to move in the right direction. We move the stop to the middle line 20 and keep moving along it.

In this case, we have an example with opening two lots, but you can use any size. We just close half the volume on the first profit taking.

The strategy works well in calm, sideways markets. It can also be used on daily charts for long-term trading.