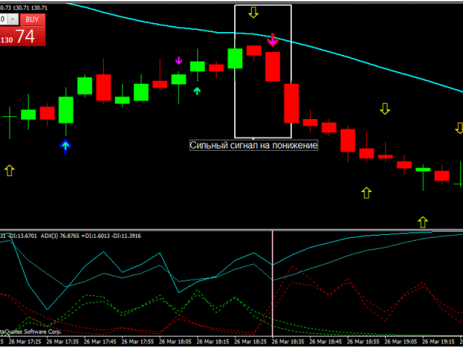 An American trader has created a binary options trading method with a very high percentage of winnings. The method is based on the analysis of a five-minute chart in the Metatrader terminal. This trading strategy is applicable to any currency pair and at any time. The expiry time of the option is selected from 2 to 5 minutes. But the author does not recommend trading during the release of important economic news. For 30 minutes before the news release and for 30 minutes after the release, you should refrain from trading, as there may be sharp movements in different directions. Custom indicators and a template for this strategy are set as usual Example of a downward trade. The yellow shooter should show up first. (sma corssover_justin indicator) down is a warning signal. Then the red ADX line must cross the green line upwards. And if after closing the current candlestick, a large red arrow appears along with a pink one, sell the option. This is a strong signal with a high probability of winning, because in addition to the appearance of indicator signals, the price is below the moving average Example of a more risky descent signal. The red arrow appeared one candle after the yellow one, and the price is above the moving average. Such signals should be either ignored or set to a lower amount An example of a promotion signal. A yellow up arrow then the green ADX line crossed the red line up. After the green and blue arrows appear and the candlestick moving middle line crosses upwards, we buy the option Risky promotion signals. In the first case, the confirmation arrow appeared one candle after the warning arrow, and in the second case, the blue arrow did not. But here the probability increases because the price is above the moving average.

The system described here is only the basis for developing your own style. By experimenting on a demo account you should choose the right time and currency pairs. The author, for example, trades EURJPY and USDCAD pairs during London and New York sessions.